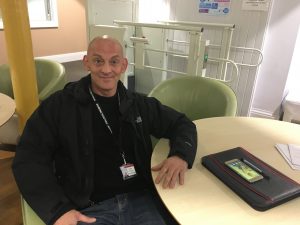 A burglary victim who lost over £30,000 worth of valuables has told how meeting the burglar, Lee Jones, face to face led him to offer support, helping the offender to turn his life around.

Richard Quinn who lived in Darwen at the time of the burglary is speaking out to highlight the benefits of victim and offender conferences as part of Restorative Justice Week (21-27 November).

Richard said: “Initially I wasn’t sure about meeting him at all. I still felt very angry and thought I might go into the meeting for the wrong reason. The Restorative Justice Officer did a great job explaining the process to me and convinced me that Lee wanted to change.

“Meeting him in person wasn’t what I expected at all. I was surprised by how he looked and how well prepared and articulate he was. He looked me in the eye throughout and I was able to tell him about the effect the burglary had had on me.

“What impacted on me the most was the fact that I could tell that he really wanted to turn his life around. It was at that point that I started seeing things differently.”

Richard learned more about the offender’s past and his battle with substance misuse which had led him to become a serial offender. He said: “I didn’t feel overly sorry for him as we all have our struggles in life but I do believe that everyone deserves a second chance. Meeting him and understanding why he struggled has convinced me of this even more.”

Since the meeting Lee has completed his prison sentence and has been off drugs for almost three years. He said: “When I was doing the burglaries I was on crack and heroin and burglary for me was about selling things to get the money for my drugs. I never thought about how it made anyone feel.”

Lee said meeting with Richard was just one of the things that made him want to change his life. He said: “It made me feel terrible. I felt very remorseful, regretful, ashamed and guilty. The watches I stole had sentimental and should have been passed down.

Six months after meeting Lee for the first time, Richard received a letter. In it Lee recalled the conversation they had had in great detail and told Richard that he understands and really regrets the impact he had on his life.

Richard recalled: “The letter left me so impressed that I decided I wanted to help him break the cycle of reoffending and decided to meet with him again.”

Lee was released from Prison in August 2016 having served his sentence and has met with Richard again on two separate occasions. Richard has since offered to support the man with job applications.

Lee now works for a charity supporting people with substance abuse issues and has not re-offended since his release from prison.

Lee said: “There were many contributing factors that made me change my life, including losing my wife and family and friends as well as meeting Richard. It has been difficult but I am not ashamed of my life and want to use my experience to help others.”

Police and Crime Commissioner Clive Grunshaw is responsible for ensuring Lancashire provides restorative justice services as a means of preventing re-offending: “Richard and Lee’s case is a perfect example of how Restorative Justice can make a major difference to the lives of both the offender and the victim.

“We know that those who take part in case conferences like this are less likely to re-offend and that is why we are prioritising this approach in Lancashire.”

Find out more about restorative Justice.

Tweets by @LancsVS
View All Tweets

Over the past year more than 46,000 referrals have been made to Lancashire Victim Services, the free county wide... Read More